As promised by the Thai regime of Thaksin Shinawatra and his nepotist appointed proxy, sister Yingluck Shinawatra, it has released its black-clad militants against unarmed students in Bangkok, leading to several deaths, many more injuries and ongoing clashes on . Regime thugs have surrounded hundreds of students attending Ramkamhaeng University, directly next to  Bangkok’s Rajamangala Stadium were a pro-regime rally has been ongoing for the last week. Students began demonstrating against the rally today specifically because of the noise and vitriol emanating from the stadium non-stop, day and night, disrupting the densely populated district.
Video: Already taken down from (by?) Facebook, but downloaded by Land Destroyer/ATNN beforehand, students can be seen trapped on Ramkamhaeng University’s campus, attempting to break out.  A constant hail of objects is being thrown at them and from the same direction muzzle flashes and gunfire can be seen and heard. Students can be heard saying, “Watch out! They’re shooting. We’re being shot at.” Bangkok’s English newspaper, the Nationconfirms one student has been confirmed killed by gunfire…..

The Western media has been quick to seize upon the violence, coordinating with the regime whom it backs with an impressive legion of Washington lobbyists, to blame the protesters for the violence. While articles like AP’s “One person killed, five wounded in deadly demonstrations in Bangkok,” portray a bloodbath of the protesters’ doing, the first deaths being report are students, shot to death. The Nation has confirmed the first death in its article, “One Ramkhamhaeng student shot dead,” that:

He was shot at the back and the bullet pierced through his lung. He died at the Ramkhamhaeng Hospital, the hospital confirmed. 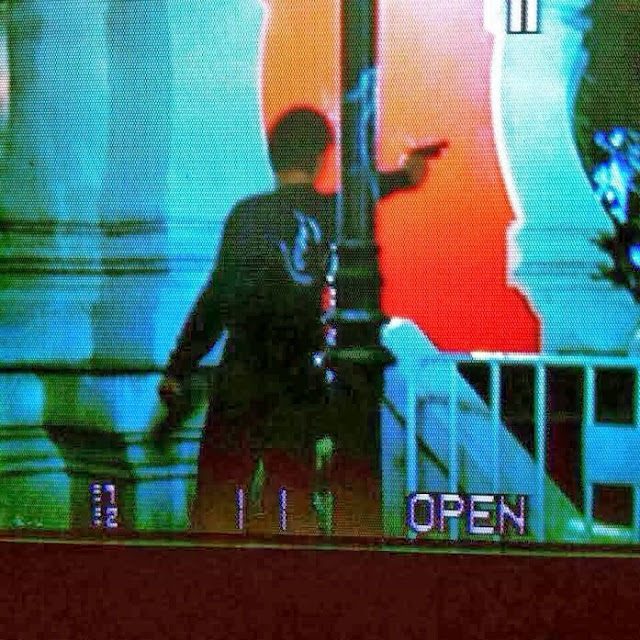 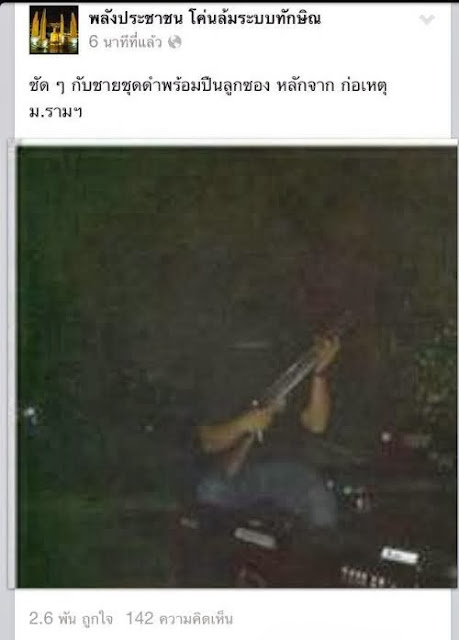 Images: Photographs of the gunmen so far responsible for the death of at least one student and many more injuries, have begun trickling out. The men are clad in black, carrying a variety of weapons. There have been reports of both shooters operating in the streets and from rooftops.
….

While the regime and its Western backers may play ignorant as to who the black-clad gunmen are (as they attempted to do in 2010), the regime itself had actually already revealed its plans just days before this violence unfolded – by accident.
Former Reuters journalist Andrew Marshall, turned hired pen for the embattled regime’s dictator, Thaksin Shinawatra, revealed just days prior, the regime’s plan to unleash armed militants to undermine and breakup the protests. Marshall may have believed he was reporting rumors designed to blunt another historical turnout of anti-regime protesters planned later today.
On his Facebook page he wrote (emphasis added):


Meanwhile, Thaksin Shinawatra’s secret “black shirt” force of provocateurs, mostly made up of navy SEALS and marines, is back on the streets again for the first time since May 2010 and has infiltrated Suthep’s rabble. If protests escalate they will seek to incite deadly violence ahead of King Bhumibol’s birthday to discredit Suthep and his movement for good. The military remains divided and weak, and top commanders have no intention of intervening for now. Unless sanity prevails in the next few days, there will be more bloodshed on the streets of Bangkok in early December.

The regime itself admitted just days ago, in Bangkok’s Nation article, “Govt ups ante in publicity battle with protesters,” that (emphasis added):

“We have rejected several parties’ demands for a House dissolution. The party’s urgent strategy is to create fear among the public that the anti-government protests are violating the law,” the source said.

From Thursday night and into Friday morning, the regime’s Interior Minister had taken the stage of the pro-regime rally, stirring up their mobs even as gunshots were fired and protesters were being killed, just beyond the walls of the stadium. Speakers took turns taking to the stage, with their colleagues smirking in the background, all while the foreign media began reporting on violence and deaths. 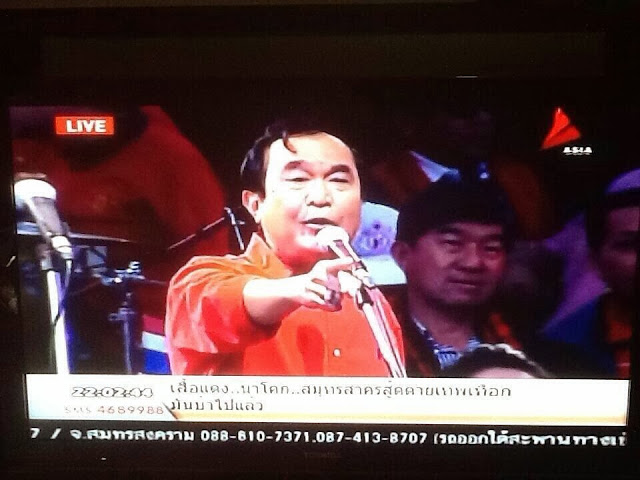 Image: The regime’s Interior Minister, Jarupong Ruangsuwan, takes to the stage the night their militants were released into the streets to begin firing on nearby protesting university students. Deaths have already been reported. 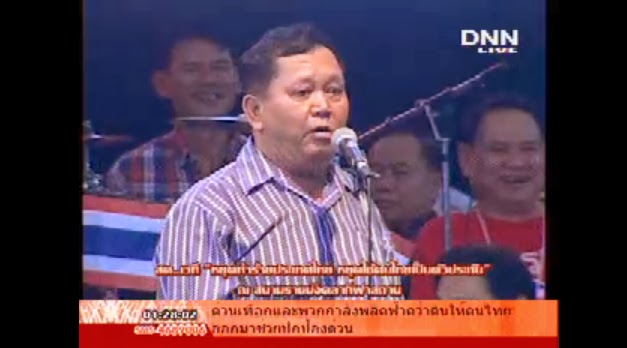 Image: At approximately 1:30am Bangkok, Thailand time, speakers take turns on stage speaking to a pro-regime rally held at Bangkok’s Rajamangala Stadium while their colleagues behind them smirk and laugh – even as helicopters circle overhead and shots can be heard outside. This is after the first deaths have been reported across local and foreign news.
As of 2:30am local time, sporadic gunfire can still be heard, as well as louder individual explosions. Helicopters have intermittently flown overhead, and more deaths are in the process of being confirmed. When Bangkok awakens tomorrow, it will be to yet another Shinawatra prime minister with the blood of the Thai people on their hands.

Posted by Baldwin Templeton at 2:18 PM