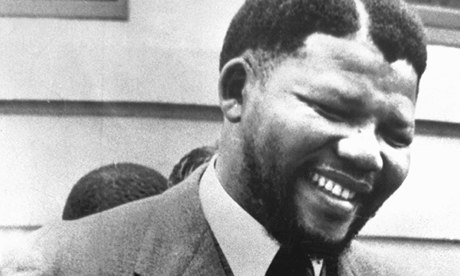 Nelson Mandela, photographed in the early 1960s. The letter said Mandela was trained to use weapons and sabotage techniques, and 'the staff tried to make him into a Zionist'. Photograph: Staff photographer/Reuters/Corbis
Nelson Mandela apparently underwent weapons training by Mossad agents in Ethiopia in 1962 without the Israeli secret service knowing his true identity, according to an intriguing secret letter lodged in the Israeli state archives.
The missive, revealed by the Israeli paper Haaretz two weeks after the death of the iconic South African leader, said Mandela was instructed in the use of weapons and sabotage techniques, and was encouraged to develop Zionist sympathies.
Mandela visited other African countries in 1962 in order to drum up support for the African National Congress's fight against the apartheid regime in South Africa. While in Ethiopia, he sought help from the Israeli embassy, using a pseudonym, according to the letter – classified top secret – which was sent to officials in Israel in October 1962. Its subject line was the "Black Pimpernel", a term used by the South African press to refer to Mandela.
Haaretz quoted the letter as saying: "As you may recall, three months ago we discussed the case of a trainee who arrived at the [Israeli] embassy in Ethiopia by the name of David Mobsari who came from Rhodesia. The aforementioned received training from the Ethiopians [a codename for Mossad agents, according to Haaretz] in judo, sabotage and weaponry."

It added that the man had shown interest in the methods of the Haganah, a Jewish paramilitary organisation that fought against the British rulers and the Arab population of Palestine in the 1930s and 40s, and other Israeli underground movements.
It went on: "He greeted our men with 'Shalom', was familiar with the problems of Jewry and of Israel, and gave the impression of being an intellectual. The staff tried to make him into a Zionist. In conversations with him, he expressed socialist world views and at times created the impression that he leaned toward communism.
"It now emerges from photographs that have been published in the press about the arrest in South Africa of the 'Black Pimpernel' that the trainee from Rhodesia used an alias, and the two men are one and the same."
According to Haaretz, a later handwritten annotation to the letter confirmed the Black Pimpernel was Mandela. The newspaper said the letter was kept in the state archives, and was discovered a few years ago by a student researching a thesis on relations between Israel and South Africa.
The Israel foreign ministry website refers to a document which confirms a meeting between Mandela and an Israeli official in Ethiopia in 1962, but makes no explicit reference to the Mossad, or any kind of training.
An entry dated 9 December 2013 says: "The Israel State Archives holds a document (not released for publication) showing that Mandela (under an assumed identity) met with an unofficial Israel representative in Ethiopia as early as 1962 … The Israeli representative was not aware of Mandela's true identity. Instead the two discussed Israel's problems in the Middle East, with Mandela displaying wide-ranging interest in the subject. Only after his arrest in 1962, on his return to South Africa, did Israel learn the truth."

Get the Guardian's daily US email

Our editors' picks for the day's top news and commentary delivered to your inbox each morning.
Sign up for the daily email
Article history

More from the Guardian

More from around the web

33 Celebrities Who Have Killed People
(Ranker)

On the Guardian today

Posted by Baldwin Templeton at 6:57 AM